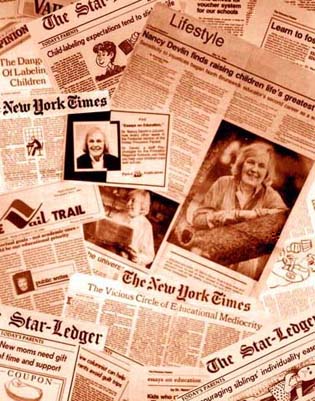 Nancy has written over 700 columns and essays on the subjects of education and parenting. You can sign up for her newsletter to get a new one delivered to your inbox every Saturday morning..

Parents need to model appropriate behavior when their children are young to teach them that violence in relationships is not acceptable. Parents must counteract the dominant theme in many movies, television shows and pornographic publications which graphically depicts violence toward women. The "entertainment" media shriek the message that violence is something men do to women and women have to put up with if they want to have or keep a relationship. It is never too early for parents to begin this instruction and it cannot be left to chance. Every time violent behavior is shown on television, parents should comment on what is wrong with the message of abuse. They could also comment on other ways this couple or family could solve their problems without resorting to violence. Recent data indicate that the home is actually a more dangerous place than the streets for women. More than a third of the women slain in the US die at the hands of husbands and boyfriends.

In addition, the multimillion-dollar pornography industry promotes the rape and subjugation of women.

85 percent of women in the workplace experience sexual harassment during their careers and pornography is the major cause of sexual abuse. Domestic violence is not a priority with police or with physicians in emergency rooms. Many women have no place to turn.

85 percent of women in the workplace experience sexual harassment during their careers and pornography is the major cause of sexual abuse.

A bodyguard named Gregory Kottke opened an agency and found his clients were not professional athletes or business executives as he had expected but battered women. Many parents may feel that this topic is not applicable to their family because there is no abuse and the parents respect one another. This may be true but parents need to be alert to outside influences especially the macho message given to their sons and the submissive message given to their daughters by peers. In this case, an ounce of prevention is worth a pound of cure especially if you can help your daughter recognize and be alert to the macho boyfriend who might involve her in a potentially destructive and dangerous relationship.

Such situations cut across all economic and cultural levels.

All families are potential victims. National surveys find that one in every eight high school girl will be subjected to dating violence by the time she graduates. There are signs she should know about to alert her to a potentially abusive relationship.

Her boyfriend forbids her to talk to certain peers. He decides on their social activities and even might try to control what she wears.

He then may begin to use verbal put-downs and humiliate her.

Threats and intimidations come next usually followed by sexual or physical abuse. As in adult domestic violence, the girl usually says: "He's sorry and says he won't do it again." If you have some sense that your daughter is involved in such a relationship, encourage her to talk to you about it. Experts in this field say that teen-agers do not want to lose their independence and are afraid their parents will become restrictive if they talk about their problems. Establish a relationship with your daughter early so that she trusts you enough to talk about everything and anything.

I encourage you to start such dialogues with your children now before it is too late.